Solar is in many ways the most promising of the low carbon technologies.  It is highly scalable, with an essentially unlimited resource (see below).   Costs have decreased rapidly in recent years, and there is no obviously binding limit on how much costs can come down.  Deployment has risen rapidly.  This page looks at how deployment might continue in future, and what might limit that growth.

To estimate how fast solar PV deployment will grow, I’ve adopted a simple logistic function (s-curve) model for the deployment of solar.  This type of function is widely used to model the growth of new technologies[i].  The results for two scenarios are shown in the chart below together with actual annual deployment to date.  Both scenarios fit the historical data well, and are similar for the next few years, but then diverge significantly.

Scenarios for deployment of solar PV 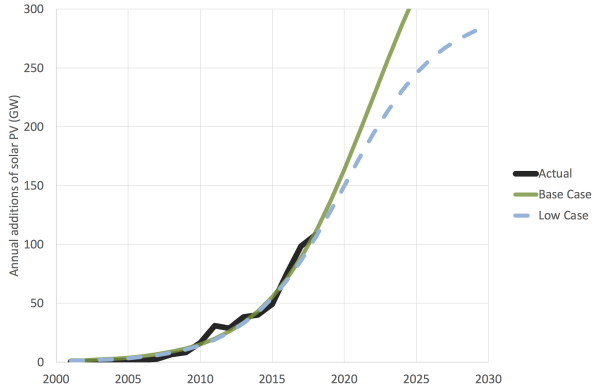 Source for historical data: BP statistical review of world Energy to 2017, estimate for 2018 based on data in previous post.

The low case is based on an electricity system continuing to grow at current rates, with solar taking an increasing share, and deployment eventually reaching 300GW p.a. (see notes below for more on this).  The base case assumes a larger role for the power sector in the energy mix, as decarbonisation drives the electrification of end use, and solar deployment eventually reaches 50% more than in the low case, at 450 GW p.a..

Of course this highly stylised analysis only gives an indication of scale, and even greater growth is possible.  However I have not included a higher scenario, as these scenarios already represent continued very rapid growth.  This will require continuing attention to how solar can best be integrated into wider energy systems, including through the greater use of battery storage.

This section looks at what might limit solar PV’s deployment if costs continue to fall and reach levels low enough to allow for additional expenditure on grids, storage and demand-side infrastructure while remaining economically competitive.  I’m not taking a view on if or when this will happen, or how low costs might become – there is still a significant way to go to reach that point.  I’m simply looking at what the remaining barriers would be if they did.  I’ll use some rough and ready numbers to look at what it might take for solar to produce around a third of the world’s electricity consumption.  I’ll assume this illustratively to be about 17,000TWh (out of a total of around 50,000TWh) by mid-century[1], which would be around 180 times the 2012 total of around 93TWh[2] of solar PV output.

As has often been noted, the solar resource is easily large enough to provide such large amounts of electricity.  Recent data from the US National Renewable Energy Laboratories (NREL) shows average US output of 70kWh/m2 based on total site area (i.e. not only the panels)[3].   Generating 17,000TWh on this basis (likely a conservative assumption, as panel efficiency is likely to increase over time) would require an area of around 240,000km2, less than 0.2% of the world’s land surface.  This is a huge area – about the size of the United Kingdom – but far less than the land devoted to agriculture, which uses solar energy to grow food.  And solar power can often make use of spaces – such as rooftops and deserts – that have few alternative uses.   Local planning and environmental concerns seem likely to become a more prominent issue as solar deployment grows.  However these concerns seem unlikely to place a fundamental limit on the industry globally.

A solar industry meeting a third of world electricity demand would be very large, but not infeasibly so.  It would require about 300GW of capacity to be added each year on average worldwide, around three times the current installation rate, which has grown to its current level in just a few years.

However, matching the location and timing of supply to demand is a huge challenge.  Electricity at a different time and place is a different product and so part of a separate market.  Grids and storage help link these different markets[4] and so minimise load shedding (though some may still be required).

The first problem is geographical proximity.  In some cases (such as California and Mexico) demand is quite close to high quality solar resources.  However in densely populated countries with weak solar resources, such as the UK, the challenge is much greater[5].  Electricity may need to be brought from sunnier regions, especially in winter, requiring large scale transmission infrastructure.  There may be more local issues. For example in Japan, grid reinforcement will be needed to bring power from the north to more populous areas, crossing boundaries between regional utilities[6].  However problems in this respect may not be universal.  One recent study indicated that the German grid is already quite robust[7].

Matching the timing of output and demand is even more problematic.  Solar output is much peakier than system demand, and peak output and demand will often not coincide.  One indication is that load balancing becomes a significant problem when solar begins to account for more than around 10-15% of generation[8].

As solar penetration increases relative prices at different times of day are likely to shift, which may well cause demand to respond.  More sophisticated market arrangements and system operation are likely to become important features of most scenarios with extensive penetration of renewables.

Matching the timing of peaks by moving power from where the sun is shining to where the demand is located could imply  tens or hundreds of GW of power to be moved across continental distances.  This is because the point at which the sun is highest in the sky (around noon), when solar output tends to be at its maximum, moves quite quickly across the surface of the earth.  At the equator it travels at just over 1000miles/hour, implying that to service demand even an hour later in the day power must be moved hundreds of miles from west to east.  The chart below shows how far west you need to go to shift the time of peak one hour later at the latitudes of some of the world’s major cities.  To move the peak a quarter of the day – from a noon production peak to 6pm demand – you need to move power a quarter of the way round the world.  And the direction does not always help.  To meet later demand on the US west coast solar panels would need to be out in the Pacific Ocean rather than Arizona and Texas.  (Though west-facing panels can help here).  China, with its population concentrated on the east coast, is better served in the evening, but would run into problems in the morning.  This implies that load balancing using transmission will be a huge challenge from a technological, regulatory and commercial perspective. 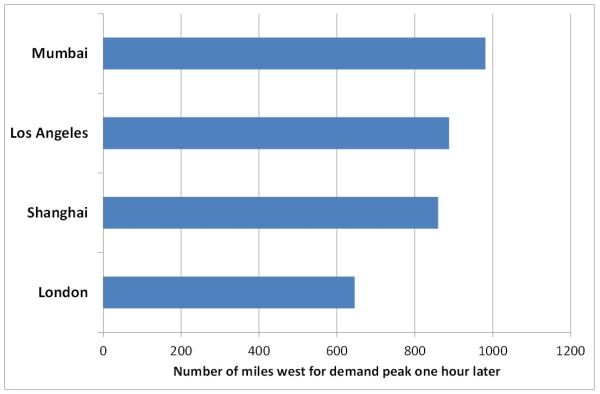 Even the most extensive links may not be enough on occasions when the sun is over the oceans.  The map below shows where the sun is shining at midnight GMT on 21st December.  There is an hour or so of setting winter sun still left on the US west coast, and the weak first hour or two of the day’s output from panels in east Asia, with Australia in daylight (and therefore with some intriguing export possibilities if links can be built far enough).  But the whole of Europe, Africa, the Middle East, India, and almost all of Russia and North and South America and a good deal of the rest of Asia are in darkness. 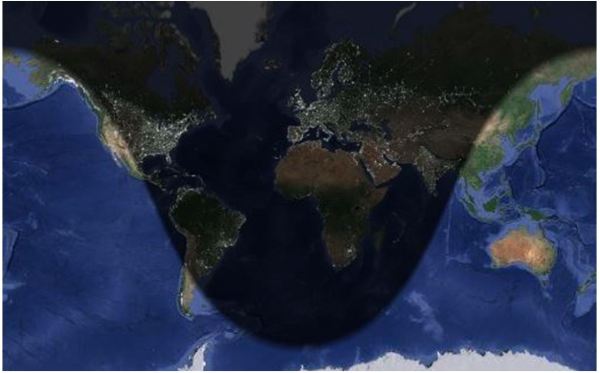 Building storage to address this problem is challenging because of the huge scale needed.  The subject is too large to go into here in detail, but in northern Europe very large amounts of storage are required even to balance load within the day. Seasonal storage (because for example average intensity of sunlight in the UK is nine times higher in summer than in winter) would require enormous capacity[9].  Germany’s subsidy for storage as part of new residential PV systems and California’s plan for 1300MW of storage by 2020 were early examples of the type of initiative that is likely to be required.

Among other effects the premium for hydro power for load balancing is likely to increase.  And reductions in load factor due to no storage being available and so surplus remaining unused at peak will be less of a problem the lower the capital costs of solar become.

Building transmission and storage infrastructure, along with the arrangements to manage them, will take decades at the scale required.  And getting the costs of storage down will remain hugely challenging, despite the enormous progress made in recent years.  This will be accompanied by the need to make significant changes to market mechanisms so that they can more effectively balance supply and demand.  None of this will be achieved easily, and strong policy drivers are likely to be required for this to happen as fast as now looks likely to be required if solar is to play a central role in decarbonising power systems.

Few expected solar to become quite so cost competitive quite so quickly.  This largely unanticipated increase in competitiveness leads to a similarly accelerated programme now being required to build grids and storage able to incorporate increasingly large amounts of solar into the world’s power systems.

[1] This is broadly similar to Shell’s Oceans Scenario, which shows 20,800 TWh of solar generation, 36% of a total of 57,800TWh.  The total consumption considered here is based on an extrapolation to 2050 of the IEA’s New Policies scenario for 2035 to 2050.  This may be higher with increased electrification of end use.  It may be lower with greater efficiency, but in any case only intended to indicate order of magnitude.  See http://s01.static-shell.com/content/dam/shell-new/local/corporate/Scenarios/Downloads/Scenarios_newdoc.pdf

[4] Consumers cannot readily substitute between consumption in different places and at different times – you need electricity in your living room now, and electricity in someone else’s living room later is not the same product.  A hypothetical monopolist could profitably impose a small but significant non-transitory increase in price, implying that the markets are separate.

[9] See reference 3 above for a discussion of this point.

A low case is estimated by looking at the size of the power sector.  This requires (in very approximate numbers) about 1000TWh of new and replacement generation each year over the next couple of decades.  If a third of this were to be solar it would eventually grow to about 330TWh p.a. of this, or about 300GW p.a..  It seems unlikely that solar’s share of new capacity would in the long run be less than this given its cost competitiveness and scalability.

This scenario appears roughly in line with Shell’s Sky scenario.  Both suggest that by 2035 Solar PV generation will be a factor of a little over 20 higher than in 2015.

However, this eventual rate of deployment may be an underestimate.  Decarbonising the energy system will require widespread electrification of end use, and so much more of the world’s energy will come from low carbon electricity.  For this analysis I’ve chosen a figure for eventual installation rate 50% greater than in the low case, reaching of 450GW p.a..  This represents one possibility within the range of scenarios for more ambitious decarbonisation, and higher estimates are possible.

[i] A logistic function is often used to model deployment of new technologies based on a range of examples, and I’ve previously used this type of model to look at electric vehicle growth – see here including examples of previous technology transitions. The analysis presented here updates my previous analysis of solar in both data and approach, given the  additional data available since that was completed.

[ii] World electricity consumption was 21,000TWh in 2015, https://www.statista.com/statistics/280704/world-power-consumption/ growing at 2.6% p.a. over 2010 to 2015.  Assuming this growth rate is maintained electricity consumption will reach around 31,000TWh by 2030.  BP’s review of energy suggests a lower growth rate, with around 2000TWh less demand in 2030 than in the case used here, presumably reflecting greater efficiency.