CCS has not yet been implemented on a scale needed to make a substantial difference to climate change.  However it continues to look necessary for the longer term, with more projects necessary to get costs down.

A decade or so ago many people expected rapid development of Carbon Capture and Storage (CCS) as a major contributor to reducing global emissions.  I was one of them – at the time I was working on developing CCS projects.  However, the hoped-for growth has not yet happened on the scale needed to make a material difference to global emissions.

The chart below shows total quantities captured from large CCS projects, including 17 that are already operational and a further 5 under construction.  The quantity of emissions avoided are somewhat lower than the captured volumes shown here due to the CO2 created by the process itself.[i]

Between 2005 and 2020 capture will have grown by only around 25 million tonnes p.a..  This is only 0.07% of annual global CO2 emissions from energy and industry.  In contrast the increase in wind generation in 2017 alone reduced emissions by around 60 million tonnes[ii], so wind power reduce annual emission more from about 5 months’ growth than CCS will from 15 years’ growth – though it took wind power several decades to get to this scale.

The picture gets even less promising looking at the types of projects that have been built.  The chart below shows the proportion of projects, measured by capture volume, in various categories.  The largest component by some distance is natural gas processing – removing the CO2 from natural gas before combustion – which accounts for over 60% of volumes.  This makes sense, as it is often a relatively low cost form of capture, and is often necessary to make  natural gas suitable for use.  However, it will clearly not be a major component of a low carbon energy system.  Much of the rest is chemicals production, including ethanol and fertiliser production.  These are helpful but inevitably small. There are just two moderate size power generation projects and two projects for hydrogen production, which is often considered important for decarbonising heat.

Furthermore, most of the projects separate out CO2 at relatively high concentrations or pressures.  This tends to be easier and cheaper than separating more dilute, lower pressure streams of CO2.  However it will not be typical of most applications if CCS is to become more widespread.

Chart 2:  Large CCS projects by type (including those under construction) 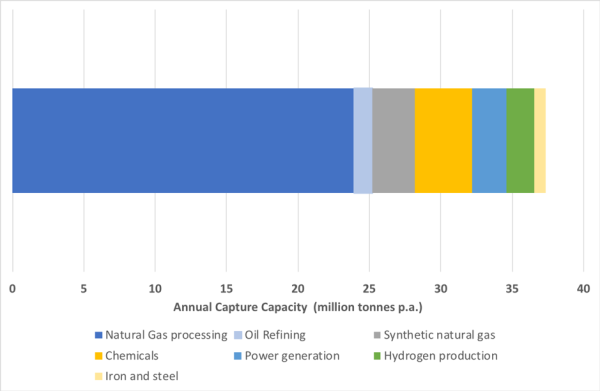 This slow growth of CCS has been accompanied by at least one spectacular failure, the Kemper County power generation project, which was abandoned after expenditure of several billion dollars.  Neither the circumstances of the development or the technology used on that particular plant were typical.  For example, the Saskpower’s project at Boundary Dam and Petra Nova’s Texas project have both successfully installed post combustion capture at power plants, rather than the gasification technologies used at Kemper County.  Nevertheless, the Kemper project’s failure is likely to act as a further deterrent to wider deployment of CCS in power generation.

There have been several reasons for the slow deployment of CCS.  Costs per tonne abated have remained high for most projects compared with prevailing carbon prices.  These high unit costs have combined with the large scale of projects to make the total costs of projects correspondingly large, with a single project typically having a cost in the billions of dollars.  This has in turn made it difficult to secure from governments the amount of financial support necessary to get more early projects to happen. Meanwhile the costs of other low carbon technologies, notably renewables, have fallen, making CCS appear relatively less attractive, especially in the power sector.

The difficulties of establishing CCS have led many to propose carbon capture and utilisation (CCU) as a way forward.  The idea is that if captured CO2 can be a useful product, this will give it a value and so improve project economics.  Already 80% by volume of CCS is CCU as it includes use of the CO2 for Enhanced Oil Recovery (EOR), with project economics supported by increased oil production.

Various other uses for CO2 have been suggested.  Construction materials are a leading candidate with a number of research projects and start-up ventures in this area.  These are potentially substantial markets.  However the markets for CO2 in construction materials, while large in absolute terms, are small relative to global CO2 emissions, and there will be tough competition from other low carbon materials. For example, one study identified a market potential for CCU of less than two billion tonnes p.a. (excluding synthetic fuels) even on a highly optimistic scenario[iv], or around 5% of total CO2 emissions.  It is therefore difficult to be confident that CCU can make a substantial contribution to reducing global emissions, although it may play some role in getting more early carbon capture projects going, as it has done to date through EOR.

Despite their slow growth, CCS and CCU continue to look likely to have a necessary role in reducing some industrial emissions which are otherwise difficult to eliminate.  The development of CCS and CCU should be encouraged, including through higher carbon prices and dedicated support for early stage technological development.  As part of this it remains important that more projects CCS and CCU projects are built to achieve learning and cost reduction, and so support the beginnings of more rapid growth.  However in view of the lead times involved the scale of CCS looks likely to continue to be modest over the next couple of decades at least.

[i] CO2 will generally be produced in making the energy necessary to run the capture process, compression of the CO2 for transport, and the rest of the transport and storage process.  This CO2 will be either emitted, which reduces the net gain from capture, or captured, in which case it is part of the total.  In either case the net savings compared with what would have been emitted to the atmosphere with no CCS are lower than the total captured.

[ii] Wind generation increased by a little over 100 TWh between 2016 and 2017 (Source: Enerdata).  Assuming this displaced fossil capacity with an average emissions intensity of 0.6 t/MWh (roughly half each coal and gas) total avoided emissions would be 60 million tonnes.

I have now been writing this blog for just over five years, and it seems timely to step back and look at how the climate change problem appears now compared with five years ago.

In some ways it is easy to feel discouraged.  In the last five years the world has managed to get through about a tenth of its remaining carbon budget, a budget that needs to last effectively forever.

However, in many ways there seem to be reasons for much greater optimism now than five years ago.  Several trends are converging that together make it appear that the worst of the risks of climate change can be avoided.

There is increasing action at the national level to reduce emissions, reinforced by the Paris Agreement …

Legislation is now in place in 164 countries, including the world’s 50 largest emitters.  There are over 1200 climate change and related laws now in place compared with 60 twenty years ago[i].  And this is not restricted to developed countries – many lower income countries are taking action.  Action at national level is being supported around the world by action in numerous cities, regions and companies.

This trend has now been reinforced by the Paris Agreement, which entered into force in November 2016, and commits the world to limiting temperature rises and reducing emissions.

There is increasing evidence of success in reducing emissions …

Many developed countries, especially in Europe, have shown since 1990 that it is possible to reduce emissions while continuing to grow their economies.  Globally, emissions of carbon dioxide from energy and industry have at least been growing more slowly over the past four years and may even have reached a plateau[ii].

Carbon pricing is spreading around the world  …

Among the many policies put in place, the growth of carbon pricing has been especially remarkable.  It has grown from a few small northern European economies 15 years ago to over 40 jurisdictions[iii].  Prices are often too low to be fully effective.  However, carbon pricing has also been shown to work spectacularly well in the right circumstances, as it has in the UK power sector.  And the presence of emissions caps in many jurisdictions gives a strong strategic signal to investors.

Companies are under increasing pressure to say how their businesses will be affected by climate change and to do something about reducing emissions.  And initiatives such as the Climate Action 100+, which includes over two hundred global investors controlling over $20 trillion of assets, are putting pressure on companies to step up their action.  This will further the trend towards increasing investment in a low carbon economy.  Meanwhile, many funds are divesting from fossil fuels, and vast amounts of capital are already going into low carbon investments.

Solar and wind power and now at scale and continuing to grow very rapidly.  They are increasingly cost-competitive with fossil fuels.  The decarbonisation of the power sector thus looks likely to proceed rapidly, which will in turn enable electrification to decarbonise other sectors.  Electric vehicle sales are now growing rapidly, and expected to account for the majority of light vehicle sales within a couple of decades.  Other technologies, such as LED lighting are also progressing quickly.

This is not only making emissions reductions look achievable, it is making it clear that low carbon technologies can become cheaper than the high carbon technologies they replace, and can build whole new industries as they do.  As a reminder of just how fast things have moved, in the last five years alone, the charts here show global generation from wind and solar since 2000. 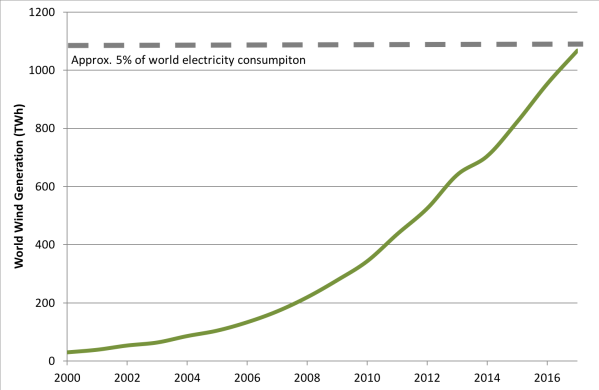 The climate has already warmed by about a degree Celsius, and some impacts from climate change have been greater than expected.  However, the increase in temperature in response to increasing concentrations of greenhouse gases has so far shown few signs of being towards the top end of the possible range, although we can never rule out the risk of bad surprises.

Taking these trends together there is reason to be cautiously optimistic …

There will still be serious damage from climate change – indeed some is already happening.  And it is by no means clear that the world will act as quickly as it could or should.  And there could still be some nasty surprises in the earth’s reaction to continuing emissions.  Consequently, much effort and not a little luck is still needed to avoid the worst effects of climate change.

But compared with how things were looking five years ago there seem many reasons to believe that things are beginning to move in the right direction.  The job now is to keep things moving that way, and to speed up progress.