The spread of carbon pricing around the world since 2005 has been remarkable.  In the early 2000s carbon pricing was in place in just a few jurisdictions, mainly in northern Europe, accounting for less that 1 % of world emissions.  The first major increase in the coverage of carbon pricing was the introduction of the EUETS in 2005.  Since then many other jurisdictions have introduced pricing.  Around a quarter of CO2 emissions from energy and industry are now in jurisdictions with pricing.  A national emissions trading scheme in China is expected to be introduced before the end of this year and consolidating over the remainder of this decade.

All this will have been achieved in only about a decade and a half.  This is illustrated in the chart below, which shows over time the proportion of CO2 emissions from energy and industry that are in jurisdictions with carbon pricing (blue line), and the proportion of that are priced (green line) . 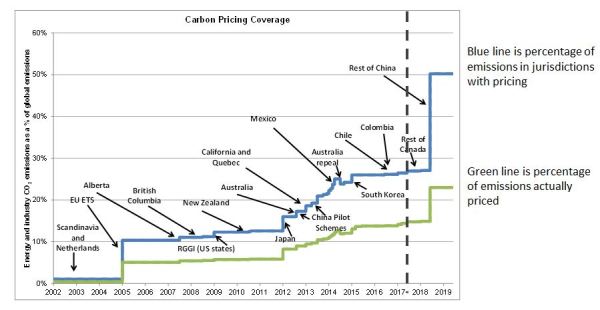 The green line shows the amount of emissions actually priced.  This represents a smaller fraction of world emissions than the blue line, as not all emissions in jurisdictions are priced – typically carbon pricing only covers about half of total energy and industry CO2 emissions, although it is more in some cases (e.g.California) and less in others (e.g. RGGI).

For clarity the proportions are fixed at 2013 levels, although they change over time in practice.

Note: Data excludes the Australian Safeguard Mechanism, the Washington State baseline scheme, and the proposed South Africa tax (which has been repeatedly delayed).

With measures in place across the EU, China, and parts of north and south America carbon  pricing has become the norm.  This is likely to put pressure on other jurisdictions without such measures to act.

There are, of course, many reasons to remain cautious about progress.  The national scheme in China remains uncertain in its coverage, stringency and effectiveness over time.  There have been setbacks at the Federal level in the USA.  Prices in the EUETS remain low.  And, even with all the present and prospective schemes in place, emissions reductions still fall short of what’s necessary to achieve the goals of the Paris Agreement.

But there has been tremendous progress in a relatively short time.  Discussions on climate policy needs to recognise this context.  There remains a pressing need to enhance this world-wide momentum, so that global emissions can begin their ever more necessary rapid downward track.  But acknowledging that should not obscure the remarkable progress that has been made.

Data: Emissions data is for 2012, from the EDGAR database, with no adjustment for changes in relative volumes over time.  Shares at subnational level are estimated based on a range of data.  Data sources include  http://edgar.jrc.ec.europa.eu/  and Zhao et. al., China’s CO2 emissions estimated from the bottom up: Recent trends, spatial distributions, and quantification of uncertainties  Atmospheric Environment, Volume 59.

Data on the spread of carbon pricing is from here:

5 thoughts on “1. The spread of carbon pricing and other climate legislation”