The December 1892 issue of the Strand magazine contained the first appearance of the Sherlock Holmes story “The Adventure of Silver Blaze”.  The same issue also contained the following advertisement for gas lamps, which were then facing competition from a new technology – the electric light bulb.

The advertisers had a point.  Even by 1900, eight years after this advertisement was placed, electricity was still 25 times more expensive per unit of energy than gas, but only 7 times more efficient, so electric lighting remained the preserve of luxury homes and commercial premises.  But by 1930 electricity was only 5 times more expensive than gas and 10 times more efficient.  A huge switch to electric lighting was underway, which would displace gas almost completely by the middle years of the twentieth century.

This transition from gas to electricity marked one stage in the increasing availability of artificial light over the last few hundred years which has transformed the way we live.  Some now classic research by Fouquet and Pearson first published in 2007 showed how changes in technologies have always been accompanied by increasing use of light (measured in lumen-hours), with consumption of lighting increasing by a factor of over 100,000 in the past 300 years. 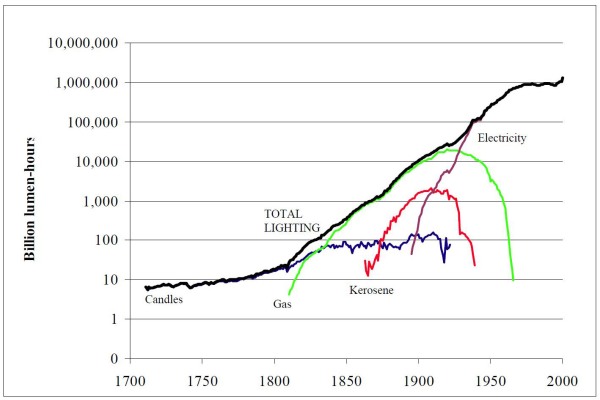 However, there appears to have been a plateau towards the last quarter of the 20th century, with a tick up at the end.  This raises the important question of whether demand for lighting is saturating, or whether there is still room for growth in the demand for lighting services.    If demand for lighting services is saturating then producing the same service with much less electricity may lead to substantial savings in emissions from electricity generation.  However if demand has not yet saturated, increases in efficiency through the wider deployment of new technologies, especially LEDs, could lead to lower than expected savings, as  increased efficiency reduces price per lumen and so increases demand, a rebound effect.

As a first step in looking at this, I’ve taken the data from the analysis and plotted it on a log scale.  This shows clearly how consumption has increased as population and incomes (measured by per capita GDP) have risen and prices have fallen.   The central role played by efficiency is indicated by the dashed line, which shows the number of kWh needed to produce a unit of light (1/efficiency).  Comparing this with the solid blue price line showing price indicates that the 100 fold fall in price per unit of light in the 20th century was due to increased efficiency, mainly as electricity replaced gas.  Yet demand rose strongly over the period, increasing more than 100 fold.  This challenges the view that increases in efficiency translate into reductions in demand, and thus emissions.

Chart:  Per capita consumption rose as incomes rose and prices fell, with efficiency increases being the major contributor to price falls …

Source: Data is taken from Fouquet and Pearson 2007 and Fouquet 2013

There seem to be at least three good reasons for suggesting that demand for lighting services will continue to grow strongly in the coming decades.  First, interior light levels are still well below the intensity of daylight, by as much as one or two orders of magnitude.  There is no immediately apparent reason why people should have an intrinsic preference for lower light levels than found naturally, at least for much of the time, and especially in winter.

Second, every major technological shift has caused an increase in the consumption of lighting services in the past.  LED lighting now appears, together with other technologies, to be introducing such a major technological shift.  There will surely be significant progress in the coming decades, with costs falling and the quality of the light improving.  If the historical pattern is followed this will lead to an increase in demand.

Third, incomes will continue to rise, which is also likely to lead to an increase in demand.

Working in the other direction, in many existing buildings there may be many instances in which people simply replace older halogen bulbs with LEDs generating a similar amount of light, simply because that is what’s available.  This generates a large efficiency saving.

In their more recent research Fouquet and Pearson have estimated both price and income elasticity of lighting demand over time.  They have found that both income and price elasticities have fallen below the very high levels found in the late nineteenth and early twentieth centuries.  But they are still materially different from zero.  Demand for lighting services can be expected to grow even in a mature market such as the United Kingdom over the next half century, given expected increases in income and reductions in the price of lighting services.  Estimates  indicate that despite increases in average efficiency of lighting of 2% p.a. electricity use for lighting could still increase by more than a third in the coming decades.  Even if elasticities do fall somewhat over time, with greater demand saturation than yet evident, and other cost increases somewhat offset price falls due to efficiency there will be major limitations to the ability of lighting efficiency to produce very marked percentage reductions in emissions relative to current levels.

Chart:  Both income and price elasticities for lighting demand have varied greatly over time, and remain significantly different from zero… 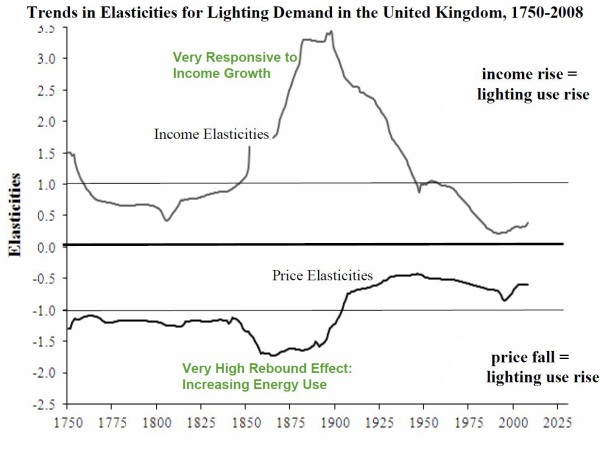 Source:  Fouquet and Pearson 2012.  One of the authors has since refined these estimates (Fouquet 2013) but this does not greatly affect the general pattern or current values.

This analysis does not necessarily generalise to other services.  Lighting remains a minority of total electricity demand even in the residential sector, and there may be greater saturation effects in other applications, for example in some domestic appliances.   For example, energy use by refrigerators sold in the US has declined enormoursly since the mid-1970s.  However other sectors, such as passenger transport and domestic heating, also show continuing growth in demand for energy services over the very long term, confirming that the type of trend found for lighting is not unique.

Increased lighting efficiency, however desirable, thus seems unlikely to do much to avoid the need for very large amounts of low carbon electricity generation.  Efficiency will help but it will be nowhere near enough on its own.

Roger Fouquet and Peter J.G. Pearson (2007) Seven Centuries of Energy Services: The Price and Use of Light in the United Kingdom (1300-2000) (Energy Journal)