Within the next two or three years some form of carbon pricing will be in place in jurisdictions accounting for nearly a quarter of the world’s CO2 emissions from energy and industry (although not all emissions in those jurisdictions are priced).  This will have been put in place in little more than a decade, a remarkable achievement.

For the first post on this blog, it seems appropriate to take a look at how far carbon pricing, a central tool of climate change policy, has spread.

There are now more than a dozen major carbon pricing schemes either in place or under development around the world.  Two or three years from now, assuming current programmes run to schedule, carbon pricing will be in place in jurisdictions accounting for just under a quarter of total global CO2 emissions from energy and industrial processes.

This will have been achieved in little more than a decade (see chart).   In the early 2000s carbon pricing was in place in just a few jurisdictions, mainly in northern Europe, accounting for less that 1 % of world emissions.  The first major increase in the coverage of carbon pricing was the introduction of the EUETS in 2005.  Since then several countries and provinces have introduced pricing.  Schemes in Australia, California and Quebec have all gone live in the last year.  The next big step up in coverage is just beginning, with seven trial emissions trading schemes being introduced in China, in provinces and cities which account for around a sixth of China’s emissions.   The South Korean scheme, for which legislation was passed last year, will go live two years from now.  If South Africa implements a carbon tax, as announced in the recent national budget statement, this will add about another 1% of world emissions, bringing the total proportion of emissions in jurisdictions with pricing to around 24%.  If China were to introduce a national emissions trading scheme or carbon tax the proportion of world emissions in jurisdictions with carbon pricing would rise to over 40%. 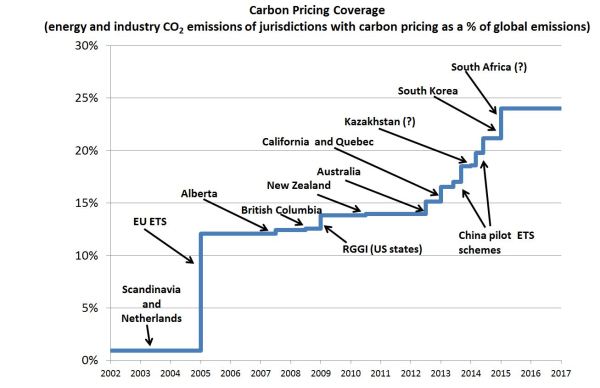 Source:  Emissions data is for 2010, from the EDGAR database[i], with no adjustment for changes in relative volumes over time.  Data for North American states and provinces is taken from official statistics.  Data for China is from Zhao et. al.[ii] Timings for regional schemes in China are estimated.  The Tokyo scheme is excluded as its current status is unclear.  The small carbon tax introduced in Japan last year by modifying energy taxes is also excluded.   The Swiss scheme is included in the total for the EU.  There is also some uncertainty around the Kazakhstan scheme, although this is included.

The percentages on the graph include the total energy and industry CO2 emissions for each jurisdiction with carbon pricing, although not all of the emissions in these jurisdictions are priced.  For example, the EUETS prices a little under half of its energy and industrial CO2 emissions, focusing on large point sources, with other sectors targeted by other policies.  Thus, if all jurisdictions in the world  had carbon pricing in place the total coverage would be shown as 100%.  A chart showing the proportion of world CO2 emissions that are priced would show a lower percentage.  A recent study by the World Bank estimated around 3.3 Gt of GHGs will be priced, around 10% of world energy and industry emissions, although this total appears to exclude some of the regional Chinese schemes for lack of data [iii].

Also, CO2 emissions from land use and other greenhouse gases are excluded from the calculations.  Including these would reduce the proportion of emissions in jurisdictions with pricing, in part because of emissions from deforestation in countries without national carbon pricing, notably in Brazil and Indonesia.  There are also issues to be resolved with some of the schemes, and it remains to be seen how effective the Chinese and Korean schemes, which have yet to go live, will prove in practice.  Nevertheless the trend is remarkable, and implies that any country considering carbon pricing is very much part of the worldwide policy mainstream.

Policy was found to have regressed in only one country, Canada.  And even this was because the methodology looked at the national level only.   There has been significant progress in Canada with carbon policy at the regional level, with three separate provinces having introduced carbon pricing, one of which (Quebec) is new this year and another of which (British Columbia) has a higher carbon price than found anywhere else, at C$30/tCO2.  Even at the national level Canada has now finalised a national emissions performance standard for new power plant at 926lb/MWh (420 kg/MWh), similar to that in place in California and being legislated in the UK, which effectively prevents new unabated coal plant from being built [v].

The challenge for the future will be to maintain this momentum, but the extent of progress on climate change policy to date, although falling far short of what is needed to prevent dangerous climate change, gives a cautiously hopeful perspective with which to start this blog.

[iii]  The World Bank Study quotes just over 10Gt out of 50Gt of emissions in jurisdictins with pricing.  This is for GHGs.  The total shown here is 8Gt out of 33Gt (2010 data) for carbon dioxide emissions from energy and industry.  The main difference in the total covered appears to be due to the inclusion of a number of jurisdictions where pricing is at an earlier stage than shown here, notably Turkey, Ukraine and Brazil.  However South Africa is excluded from the World Bank total.  The total emissions actually priced is quoted as 3.3 Gt, which is 10% of carbon dioxide from energy and industry and 7% of total GHGs.  If the other pilot Chinese schemes were included this coverage would likely increase by about a percentage point (11% and 8% respectively), and thus a little under half the emissions in the jurisdictions with carbon pricing on average are estimated to be priced.  The World Bank study can be found at: http://documents.worldbank.org/curated/en/2013/05/17751166/mapping-carbon-pricing-initiatives-developments-prospects

This post deliberately does not say much about the current status of the UNFCCC process, which must await future discussion.  In the meantime coverage of this can be found on other forums, for example see http://climatestrategies.wordpress.com/

2 thoughts on “The continuing spread of carbon pricing”